Well, it’s been a while since I updated this site, but I imagine many already know that I am no longer playing RO.

I want to stress that I still like Ragnarok, I’ve put an absurd amount of hours into playing, researching, writing about the game. When I first took a break from RO I played Rift for a couple months, which while enjoyable (it was an impressive game to say the least), I came to eventually understand why old school MMO’s like RO remain appealing against the big name online games these days. RO has always been a sort of harsh game for players to pick up and play, but it’s a freedom that you don’t see much these days. The modern MMO is a treadmill of goto’s and do-this’, and for it’s grinding leveling gameplay, my experience with Ragnarok and how I play it, even how I build my character is always different from the next guy, which is something the modern MMO doesn’t give you.

I don’t necessarily dislike where RO is going right now. I don’t even dislike what they’re doing with the cash shop, it’s just how online games these days work. It’s just that spending a good part of the last decade playing the game, the game continued to take up time that I wanted to spend doing other things.

I look at RO right now and I can definitely see it being around for a good while. I’ve got to give my shoutout to Heimdallr and the GM team, they do a job that would drive a regular man insane. I don’t think I could have done it in their position. They are finally getting the freedom to tweak and change things with the game, and now it seems on a weekly basis they’re coming out with something nice for players to do, so I’m sure iRO will be well served.

So I hopefully will continue to make use of my new-found free time practicing my programming and making small games. *Shameless Plug* You can even see some of what I have online at the moment. (Game1 Game2 Video1 Video2 Timelapse1)

Anyways thanks to everyone who played with/against me on iRO, it’s been a fun time!

Edit: Of course, the resources available on this site will remain accessible for as long as I can maintain them.

No big post really.  I finally hit bishop, which means I can smack stuff, faster.  I saved up all my stat points from 90-99 so I could dump them into agi once I changed.  192 aspd on bishop?  Hell yeah. 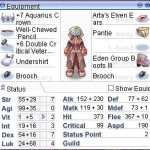 So I’m back I guess.  I wanted to leave, but in the end having nothing to do and reassurances from Heimdallr kept me around for a bit.

I didn’t want to continue doing things as I was  before, so I quickly whipped up a novelty character to mess around with. END_OF_DOCUMENT_TOKEN_TO_BE_REPLACED

Welcome to the new journal page.  Yeah, I gave in and set up wordpress instead of my crappy php blog.  The old journal page is still online and accessible, you can get to it through the following link: